Italy’s administration began to ease its severe lockdown measures in the first week of May. Giuseppe Conte, the Prime Minister of Italy has said that “the contagion curve could rise again” but the country could not afford to wait for a vaccine, so they are taking a “calculated risk” in relaxing the restrictions.

The Prime Minister announced early this month that travel to and from Italy, and between the country’s regions would be allowed from 3 June. Gyms, Swimming Pools and Sports Centers will reopen on 25 May and cinemas and theatres on 15 June. Also, travelers from the European Union will be able to enter Italy without going into a two-week quarantine.

The newly announced sets of orders are a massive step in the country’s attempt to revive its economy after more than two months of lockdown. Italian representatives say that 31.763 people have died from COVID-19 in the country, the third-highest figure behind the US and UK, but Italy’s infection rate has fallen abruptly in recent days.

Nationwide, the number of active infections fell by 1.424 cases, going from 66.553 to 65.129 total infections, according to the Civil Protection Department. Tuesday’s number of deaths bounced from Monday’s total of 99, the first time Italy’s daily casualties were lower than 100 since March 10. The country also registered 813 new cases of infection nationwide in the 24-hour period. 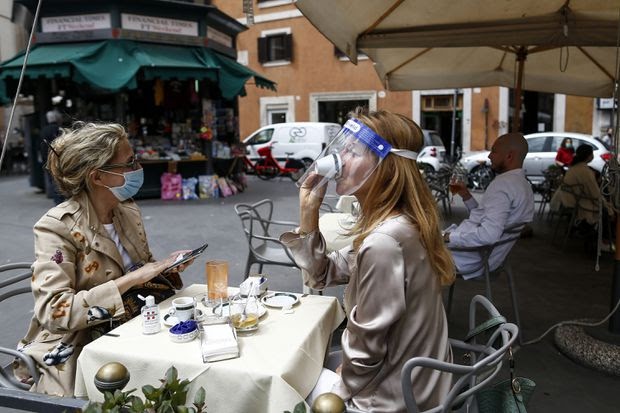 The Italian General Confederation of Enterprises, Professions, and Self-Employment (Confcommercio) reported that the almost 800,000 businesses that reopened after over two months of lockdown have “passed the test” in terms of compliance with new anti-coronavirus regulations. Of Italy’s many outdoor neighborhood markets, 60% have reopened so far and the rest are still struggling with “organizational and logistical difficulties” stemming from the new security protocols.

In a recent report Confcommercio said that consumption in restaurants, coffee shops, bars and agritourism facilities has fallen by an estimated 80% compared to the same period last year. According to experts, this was due to a combination of new Anti-COVID safety protocols that demand fewer tables in restaurants in order to guarantee social distancing and also the total absence of tourists, both foreign and domestic.

As different governments ease their Social Distancing ordinances, at We Shield we work hard to create a safe and clean environment for our front line workers and individuals at most risk of contracting COVID-19 by sourcing and distributing top-quality personal protective equipment and safety supplies at the best pricing on the market.