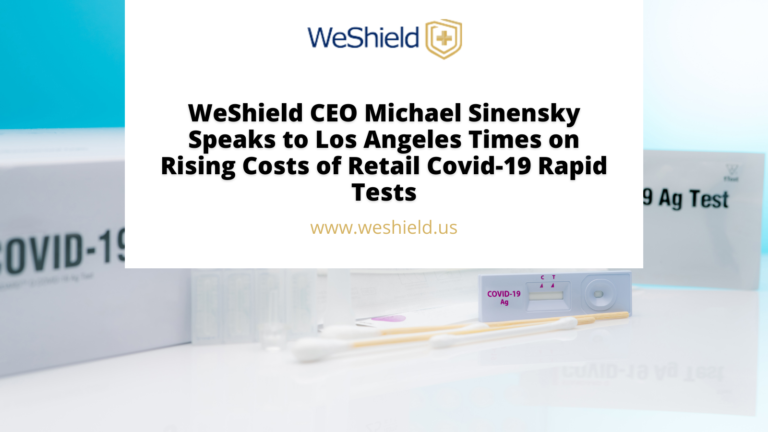 High prices for at-home COVID-19 tests are hitting the wallets of U.S. families who need them to get back to school and work — if they can find any to buy at all.

One restaurant worker in New York said she paid an acquaintance double the retail price in a sidewalk exchange for a test kit. A mom in Missouri said she’s rationing her last two-pack in case her kids show serious symptoms. Another parent is keeping her daughter home from school, where tests are required before returning after the holiday, until an in-person appointment later this week because the $80 price tag she saw in online community groups was too steep.

Digital marketplaces list BinaxNOW kits — which include two tests — for as high as $75, around three times what they cost at many large retailers. In a December statement warning against price gouging, New York Atty. Gen. Letitia James said two-packs that are usually priced between $14 and $25 were going for as much as $70 a package.

“The danger in health care is that for any life-saving product — it’s vulnerable to price gouging” because most people would pay anything to save the life of a loved one, epidemiologist and health economist Eric Feigl-Ding said in a string of tweets about high prices for at-home tests.

This desperation comes as COVID cases hit record highs in the U.S., contributing to long lines at testing sites and skyrocketing demand for at-home kits. The U.S. has largely left it up to the private market to produce and sell the tests, which are not in abundance.

Although updated recommendations from the Centers for Disease Control and Prevention do not call for people to obtain a negative test before returning to their jobs after contracting the virus, some employers are requiring that step of their workers anyway, adding to demand. At the same time, parents say they are aiming to have tests on hand because they worry about their kids catching the virus at school.

The situation has led some to take unconventional routes to obtain tests.

The worker at a New York restaurant group said she and her colleagues recently paid $180 for four test kits following a potential COVID exposure. She got the tests from someone who received them free of charge from his employer. She said she felt scammed, but paid up because she needed them.

Melanie Gall, a musician in New York, said she recently paid $37 at an independent pharmacy for a QuickVue kit, which comes with two tests and sells at chains for about $24. This was after “charming” her way onto the store’s list to call customers when tests were in stock.

Gall said the only way to safely work in the studio with other musicians is for everyone to regularly test, which was easy before the Omicron wave.

“They were so readily available, we didn’t think to stockpile them like we were in Blitz-era London,” she said.

The relative scarcity of tests in the U.S. stands in stark contrast to the situation in some European countries, where they are free and easy to find.

“In many other countries home tests are much more ubiquitous, much more varied in brands, and have less out of pocket costs,” Amesh Adalja, a senior scholar at the Johns Hopkins University Center for Health Security, said in an email. “The more affordable and accessible tests are, the more frequently they will be used.”

President Biden said last month that 500 million free at-home tests would be sent to Americans’ doorsteps, but they have yet to arrive. The administration earlier struck deals with large retailers such as Walmart Inc. and Kroger Co. to sell tests at lower prices, but that arrangement has just expired.

Some cities are distributing free tests, but they run out quickly.

So, at least for now, U.S. consumers are facing an unpredictable market for tests in which prices are sometimes frustrating, if not prohibitive.

Online medical-device retailer WeShield, which is selling the BinaxNOW kits for about $50, says that its own suppliers have recently increased prices by more than 100% due to extremely limited availability. Two weeks ago, WeShield was selling the same kits at prices below what major pharmacy chains charged.

“We had to make a choice to either not sell any tests, sell at a major loss that would bankrupt our company, or offer testing kits at market pricing and let our clients decide whether they want to buy,” Chief Executive Michael Sinensky said in an email.

“We are always stocked and continuously need to adjust prices up or down based on availability and pricing to us,” he said.

Although tests are considered an eligible medical expense that can be paid through health flexible spending arrangements or health savings accounts, that doesn’t apply if you buy them from another person.

And it’s unclear exactly how or if people such as Gall will be able to get reimbursed through private insurance for the over-the-counter tests. The White House said guidance on that would come this month.

Companies such as WeShield acknowledge that adding more tests — whether that move comes from the White House or ramped-up production from private companies — will ease the supply pressure and drive down prices.

Progress has already been made: The Biden administration announced more than $3 billion for expanding rapid virus testing last fall, and said this week that more than 200 million a month are now available, up from around 50 million a month in September.

For its part, Abbott Laboratories, which makes the BinaxNOW kits, said in an email statement that it is making 70 million tests per month, with plans to surpass that. The company says it has not raised the price of its test since it launched, though prices at retailers may have risen, like in the now-lapsed Walmart and Kroger deal.