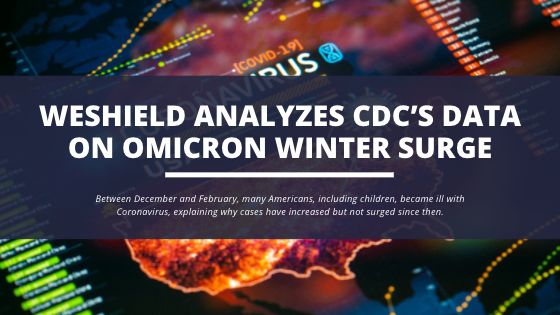 Between December and February, many Americans, including children, became ill with Coronavirus, explaining why cases have increased but not surged since then.

New government data released showed that nearly 60% of people tested positive for antibodies to COVID-19 during that time frame, an increase from 30% three months earlier.

Younger people experienced the most significant increase. Among children, the antibody rate increased from 45% to 75%.

Previous infections can protect against a subsequent infection. Still, according to Dr. Rochelle Walensky, director of the Centers for Disease Control and Prevention, it’s unclear how long that protection lasts.

“We do believe there is a lot of protection in the communities both from vaccination as well as from boosting and from prior infections,” Walensky said.

Vaccination and boosters provide reliable protection, she said. In addition, antibodies indicate that the most vaccinated age groups had the smallest increase in infections over the winter.

The CDC plans to release another study next week that shows each omicron BA.1 infection led to approximately three more variants. According to Dr. Kristie Clarke, this is the highest rate of transmission seen during the pandemic, who led the CDC’s study.

The number of infections has decreased substantially since their peak in January. However, the number is beginning to climb again with a 25 percent spike compared with the week prior, Walensky said.

In the United States, the BA.1 variant predominant in February has largely been replaced by the BA.2, responsible for 68% of infections. In addition, a subvariant known as BA.2.12.1 has been increasingly detected in New York state, where it is theorized to have originated.

Despite being less severe than earlier versions of the SARS-CoV-2 virus, the BA.1 variant still triggered a spike in hospitalizations and deaths, Walensky said.

“We’re not anticipating seeing more disease from some of these sub variants, but we’re actively studying it,” she explained.

According to Clarke, the antibody test used in the study could detect whether someone had been infected in the last two years. However, it does not determine a person’s level of protection against a new infection, which fades over time, as is the case with vaccination.

Antibodies created by vaccines are different from those tested, so it is possible to differentiate between infected people and those who were vaccinated. The CDC will release more information as it becomes available.

Our goal at WeShield is to provide our clients with timely, accurate information. You can find information on the COVID-19 pandemic and FDA approved PPE on our website.