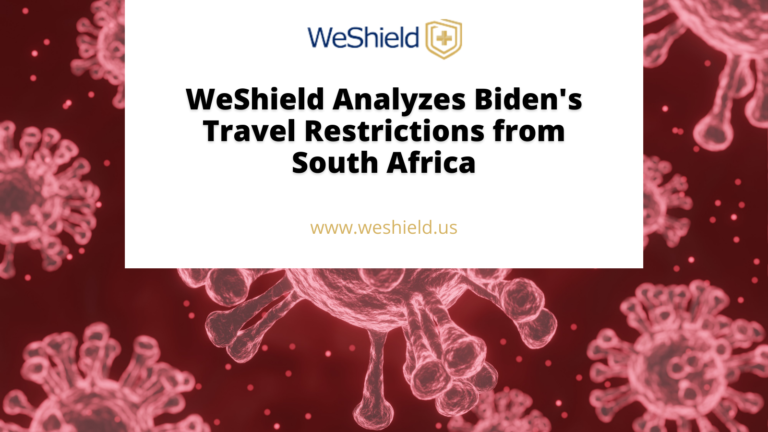 In response to a new Coronavirus variant, President Biden will restrict travel from South Africa and seven other countries beginning Monday.

As recommended by Dr. Anthony Fauci and the Centers for Disease Control and Prevention, the Biden administration has restricted travel to and from South Africa, Botswana, Zimbabwe, Namibia, Lesotho, Eswatini, Mozambique and Malawi.

The World Health Organization report has now identified this variant as a variant of concern, according to officials still learning more about the variant.

“Our scientists and public health officials are working quickly to learn more about this variant,” one official said.

Citizens and lawful permanent residents of the United States are not affected. Those traveling internationally must still get a negative test before leaving.

The United States is doing all it can to learn as much as possible about the newly identified Coronavirus variant B.1.1.529, which was discovered in South Africa. According to the health minister, a variant of the disease has been found in parts of South Africa and is spreading quickly.

As of now, “no indication” exists that B.1.1.529 is in the United States. The chief medical adviser to President Joe Biden and director of the National Institutes of Allergy and Infectious Diseases, Doctor Anthony Fauci, said Friday that US scientists are working closely with colleagues in South Africa to learn more about the emerging variant.

In an interview with CNN’s Brianna Keilar, Fauci said the virus is spreading “at a fairly rapid rate.”. Cases are confirmed in South Africa, Botswana, a traveler in Hong Kong from South Africa, and Belgium recently confirmed its first case.Scientists in the United States are in “very active communication” with their counterparts in South Africa to learn about the molecular makeup of the variant and test for it in the United States. Researchers can use this information to predict how well current coronavirus vaccines may work against the variant.

Many scientists are concerned that the variant’s high mutation rate might make it more transmissible and evade the vaccines we use today.

“Right now, we’re getting the material together with our South African colleagues to get a situation where you could actually directly test it. So, right now you’re talking about sort of like a red flag that this might be an issue — but we don’t know,” Fauci said Friday.

“Once you test it, you’ll know for sure whether or not it does or does not evade the antibodies that we make — for example against the virus, through a vaccine,” he said.

In B.1.1.529, more than 30 mutations were found in the spike protein, a component of the virus that the coronavirus uses to enter the cells it attacks. Fauci cited these mutations as being of concern, mainly because they may lead to an increase in transmissibility and evasion of immunity.

Yet “we don’t know that for sure right now — this is really something that’s in motion — and we just arranged right now, a discussion between our scientists and the South African scientists a little bit later in the morning to really get the facts,” he said. “We want to find out scientist-to-scientist exactly what is going on.”

In response to the emergence of the B.1.1529 variant, several nations — including the United Kingdom — have banned flights from South Africa and surrounding African countries.

As a company committed to providing our clients with the most up-to-date, accurate information, WeShield obtains information from credible sources. Make sure to follow our blog as we monitor the COVID-19 pandemic and continue to provide high-quality PPE and medical supplies to the public.